Ok ,so last night I told Mrs B that I needed her to come help me do a few BC raids to get my lock (and her hunter alt) some tier 6 for transmogging. After half hour or so of complaining and moaning about the raids being long and boring, I managed to bring her round to doing them with some chocolate bribary :).

Things were going well at first: blasted through the first part of Black Temple in 30 mins when she got a bit cranky that I hadnt started tea yet. After a wipe on Illidan – we forgot to keep the elementals a part in phase two (noobs!), I had all 3 peices from BT that I needed.

After, we decided to do Battle for Mount Hijal – taking two of the guild’s 70 Twinks along with us to get them any drops we didn’t want. Things were going well until the first boss, when we were too busy talking about something on the radio we forgot to pay attention to Death and Decay. Don’t we get complacent now that we’re 90?! We wiped with the boss still at about 70% lol (noobish I know).

To finish blasted our way through to the 3rd boss, only for the next lot of waves to bug out and leave us with -31 enemies left to kill. Understandably, Mrs B left in a foul mood after having wasted an hour and didn’t even get to face the bosses that dropped the tier items I wanted. Only got some shoulders for the hunter too, so a bit of a wasted trip.

UPDATE: went back this morning and completed it – finished the set. Pic below. 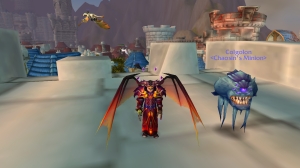