A bit of a long update today!

When we hit 83, we went to the AH and bought, for a few hundred gold, a set of 364 gear which boosted us up 100 ilvls and made things much easier. 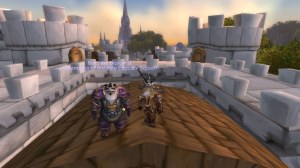 Had a good group for Vortex this time too (after a couple of false starts), and we had some fun pulling lots in there. I enjoyed grilling the dockworkers and making them cower in fear when doing the Twilight starter quests! We both think Teng Applebloom looks awesome carrying the kegs of cider too 😀

We hammered to 85 by skipping up zones ASAP and buying gear wherever possible.

We then went to Pandaland! and bought the new gear set from Dawn’s Blossom. This, along with my Spear of Xuen which I upgraded with justice from Archaeology and a couple of crafter blues, took my ilvl up to 380 and his to 370. This changed everything. I am now pulling 50k dps in dungeons, more with AoE, and for the first time… I’M BEATING HIM!!!!! 😀 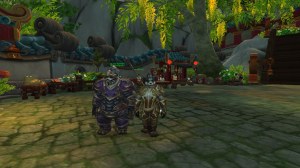 Us together, Mr B rocking his pink and blue set!