Welcome to the eighth blog post in the “Warcraft Community’s Top Things To Do Before WoD” series!

If I’m honest, I probably wouldn’t have included this topic, but many people have suggested it: “The simple grinding with a reward (either a level up or a quest reward), and sometimes you meet new friends =) Even though I’ve done it countless of times and I know many quests already by heart, it doesn’t bore me.” (Haenlic)

I’m not the greatest fan of levelling (says she with 10 level 90’s), but here we go anyway with some fun quest suggestions!

Lorelei has even written a whole chapter about her favourite quests! Read them here.

Some people *cough* not us *cough* are altoholics and clearly enjoy trying new characters/race combinations. It sounds obvious, but if you haven’t tried the opposite faction or a certain class or even another server, this is the time to try. Instead of questing, try levelling through PvP or dungeons. Little changes to your routine can be invigorating. Promise.

Exactly what it says on the tin… you’ve got to be insane to try it. However, the rewards are great if you dare. I haven’t yet started it, but you can get lots of info here. You can’t possibly complain about having nothing to do if you haven’t yet completed this… I suppose.

The Quest for Green Fire

I’ve tried this sooooo many times on my Warlock. I’ve come to the conclusion that my skill and gear level is lacking and it’ll have to wait until I become more patient, or one of them improves. However, the effect is really cool and it’s really worth perseverance. If you haven’t got a Warlock and fancy the challenge, perhaps this is a good candidate for your level 90 boost.

I won’t regurgitate the Internet, as all the info you need can be found here. I can recommend a YouTube guide by Sparkuggz which is below.

If you have tried this and need some encouragement to continue, we have a couple of friends who managed to complete it below 500 ilvl.

Yeah, the first thing I thought was “HAX!” too :p

I did this, bane of my life, but if you’re an achievement hunter or lore enthusiast, this is right up your street. YES, it’s a time grind, but it’s not the worst I can think of and you get a nice title. Gogogo!

I love the Brawler’s Guild, it’s not a secret. In itself, there’s no questing however, certain quest lines and boss kills in Pandaria grant you access to a quest in the Brawler’s Guild which award you gold and a special vanity item… and ultimately a meta achievement for killing them all. They range in level and skill, but they’re really fun and worth seeking out if you’ve already finished with the ranks.

@Schmonzh from Twitter suggested this and we agree – it’s a really fun quest. If you’ve levelled through Badlands you’ll know it well: several NPCs tell you their account of the day Deathwing came and you relive the story through them. It is fantastically silly, but punching him in the face is fab. 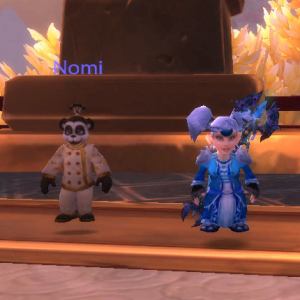 Old picture, but just as cute ^^

This adorable creature is part of the Halfhill daily and rep quests. Once you’ve finished To Be A Master, you can buy the Cooking School Bell with 100 tokens and the daily quests unlock. I’ve written about the process in a bit more detail here.  Not only do you feel wise when you impart your knowledge upon your apprentice, but you also get free stuff and it’s REALLY easy.

In fact, I’m just going to put the whole of the Halfhill quests and experience here. I love the place. You can read more about my enchantment with the area here.

I loved this answer by Lexicon of Power:

“Bonus: the sound that plays when I accept and complete quests

This brings me back to the first day I played WoW, and still gets me every time. It makes me think of hunting and learning and ADVENTURE! And adventuring is what it’s all about.”

Click here for all of the suggestions submitted via Twitter. There’s some excellent quest lines to pursue!